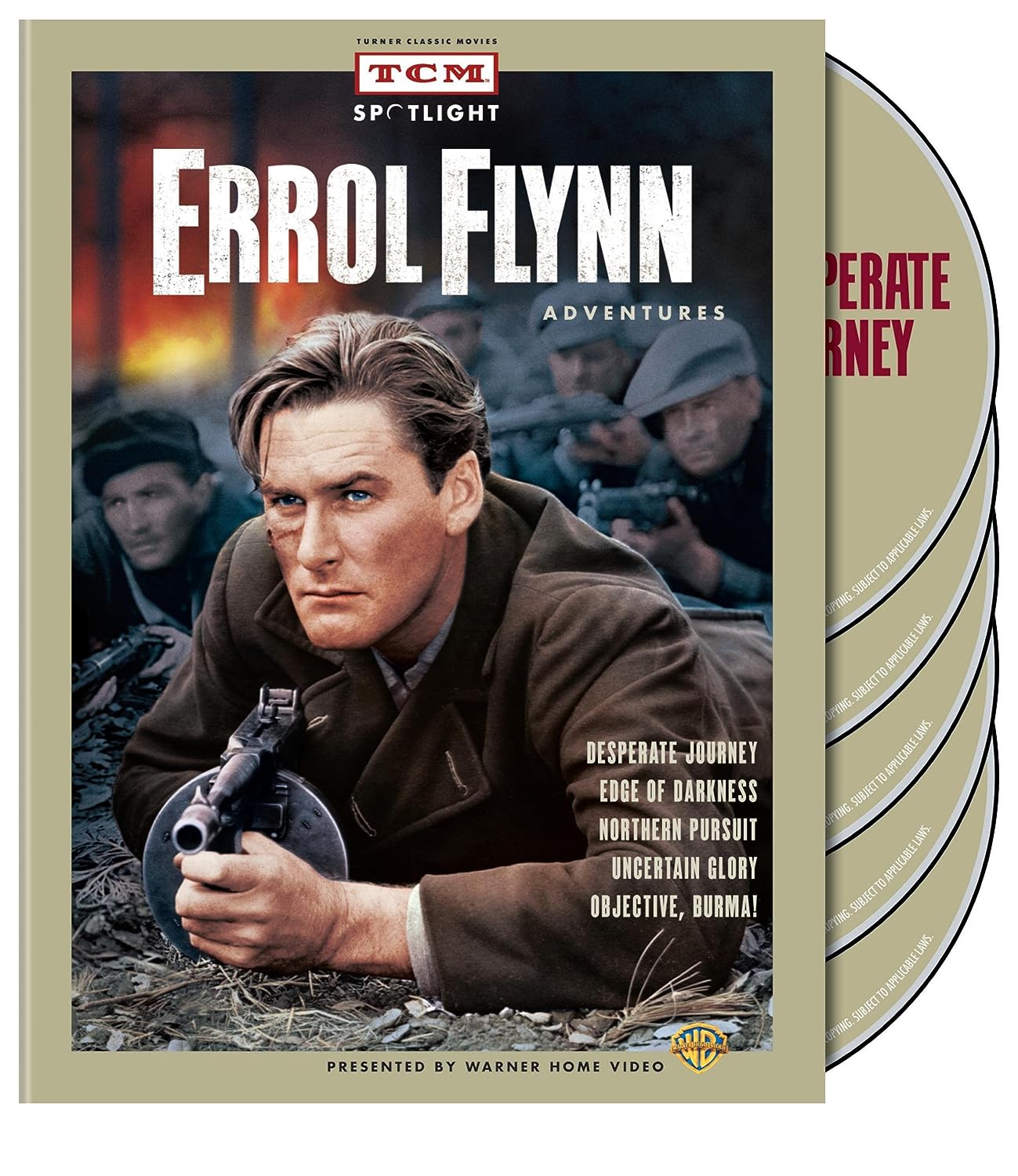 DESPERATE JOURNEY Allied airmen shot down over Germany fight their way back to England. ERROL FLYNN leads RONALD REAGAN and other flyboys in a rousing wartime spirit-lifter. EDGE OF DARKNESS They’re everyday citizens – and extraordinary heroes. Flynn and ANN SHERIDAN rally Norwegians against the Nazi occupiers of their once-peaceful village. NORTHERN PURSUIT Icebound wilds and ice-blooded Nazis! Canadian officer Flynn infiltrates a cadre of saboteurs and guides them toward their destination…and into the unraveling of their scheme. UNCERTAIN GLORY The Gestapo decree: 100 Frenchmen will die if a resistance leader fails to turn himself in. Condemned French prisoner Flynn volunteers to pose as the wanted man. Powerful heroism! OBJECTIVE, BURMA! Pinned down in the jungle – and fighting back! Flynn commands a stranded paratrooper patrol in this gritty, volatile tale noted for its battlefield authenticity.

Unlike so many boxed-set tributes to actors, this one's actually got a tight, logical theme: Errol Flynn Adventures offers five World War II pictures made at Warner Bros. during Flynn's reign as a top leading man. Four of the films were directed by one of Flynn's favored collaborators, the robust Raoul Walsh, and all of them have an urgent wartime commitment that puts them in a zone between entertainment and propaganda.

That zone is a compelling place, and often emotionally potent. The earliest (1942) of the films is also the lightest in tone: Walsh's Desperate Journey has a joshing attitude that belies its title. Flynn plays the Aussie leader of a multinational bomber crew that crash-lands in Germany (where the Germans actually speak German) and must make its way across hostile territory to safety--a suspenseful setup that allows for some derring-do and wisecracking on the trip (although Flynn and Walsh are adept at shifting gears from comedy to heroism at a moment's notice). Ronald Reagan plays a flippant US flyboy and enjoys one of his best moments on screen with an engaging scene of double talk.

Edge of Darkness, directed by Lewis Milestone, is an extraordinarily powerful 1943 film about a defiant band of resisters in a small seaside town in Nazi-occupied Norway. Serious and stirring, with messages aplenty about the importance of solidarity and sacrifice during wartime, the movie goes all the way and then some. Flynn tamps down his usual jocularity, folding himself into a remarkable ensemble (we're talking at least a dozen significant roles here) that includes Walter Huston, Ann Sheridan, Judith Anderson, and Ruth Gordon.

By comparison, Northern Pursuit is tame, with Flynn in snowy Canada, escorting a Nazi (Helmut Dantine) to custody… or is he? The question mark is about the only interesting wrinkle in this far-fetched picture, although Flynn doesn't embarrass himself. Ah, but our man slips into fine form in 1944's Uncertain Glory, a crackerjack premise that allows Flynn to exude his more roguish charms. His character is a convicted killer scheduled for the guillotine, and he and his guardian (Paul Lukas) contemplate the possibility of the doomed man falsely turning himself in as a wanted saboteur; the Nazis are holding 100 locals hostage to slaughter if the real saboteur doesn't turn himself in, and after all, wouldn't a Nazi firing squad be preferable to the guillotine?

Much larger in scope, and a demonstration of Walsh's talent for dynamic compositions and irresistible narrative flow, is Objective, Burma!, a tough battle epic in which the soldiers get realistically grimy. Flynn's platoon parachutes into Burma for a mission--but the real challenge is trekking back out again. Harrowing in both its suggestion of Japanese atrocities and its willingness to kill off characters you didn't expect to see die, this film must surely have been an influence on Saving Private Ryan. Flynn--who was 4F during the war, for various physical ailments--acquits himself nobly, proof that he was more than a swashbuckler.

The only commentary track comes with Objective, Burma!, while the other discs are filled out with fun Warner Night at the Movies shorts and newsreels; you won't want to miss the surreal "Borrah Minnevitch and His Harmonica School." --Robert Horton

You are now subscribed

Be on the lookout for a welcome email in your inbox!