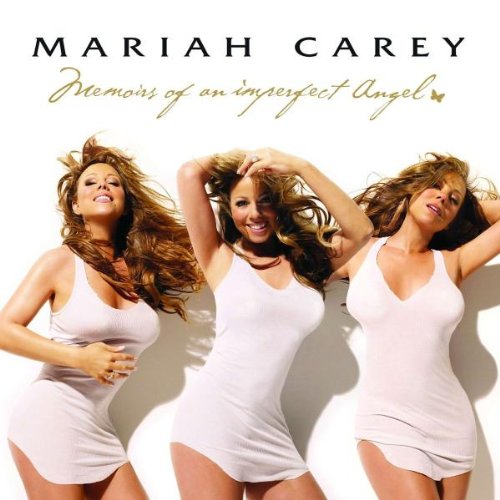 For all of her ultimate and most loyal fans, Mariah has created a special box set that is truly a collector's item.

All banded together with a brilliant signature butterfly band and housed in a beautiful box.

Imperfections are in the eye of the beholder. You can see them as flaws, or as the very qualities that make us human -- and that make us strive to be better people in search of a perfection that we know we can never fully achieve. In the thirteen songs on her spellbinding new album, Memoirs of an Imperfect Angel, Mariah Carey explores those aspects of our shared humanity with a rare depth, honesty and open-heartedness. It's one of the strongest statements in her long, distinguished career. The subject of Memoirs is love at all its stages in our lives. Experiencing it for the first time. Losing it. Remembering its most painful moments, and also its times of greatest innocence and joy. Yearning for it. Learning from it. Growing as a result of its profound power. Finding it again and being grateful for so great a gift. And, finally, being humbled, filled with wonder and elevated by love's mysterious ways. In that sense and more, Memoirs is a full, immensely satisfying journey.

"Each song is like an intimate conversation or entry in a private diary," Carey says about the album. "A lot of the songs reflect specific, different times in my life. Others were inspired by movies, actual events that happened to me, or the stories of friends who told me about experiences that they've gone through." With just one exception, Carey wrote and produced the entire album in collaboration with The-Dream and Tricky Stewart. The trio clearly shared an inspired sense of what Memoirs should be. Sinuous grooves and instantly memorable melodies flow from track to track, while the wit and intimacy of the lyrics create the feel of one friend talking to another. As well-defined as each song is, Memoirs plays with the beauty and consistency of a classic, start-to-finish album.

"My main goal was to work with people I could collaborate with without it seeming redundant or stale," Carey says. "In my opinion Tricky is one of the most underrated major producers out there right now. I really enjoyed collaborating with him. And I especially liked writing with The-Dream, basically because we both love having fun with lyrics and melodies, and we're also capable of getting more serious on deeper songs. There is a particular sense of freedom I feel when we write together -- even though I make him stay in the studio all night until he is ready to kill me! LOL!"

Memoirs' first single is the hard-hitting "Obsessed," which is accompanied by a video directed by Brett Ratner (the Rush Hour trilogy) in which Carey plays both the glamorous star and her stalker fan. Like the video, the song's lyrics combine devastating putdowns ("Last man on the Earth still couldn't get this") with humor ("See right through you like you're bathin' in Windex"). The no-nonsense "Up Out My Face" captures a similar caustic mood, dismissing a former lover with the send-off, "When I break, I break, boy." "It's a Wrap" delivers a similar message about the end of an affair: "When it's gone, it's gone." "Standing O," with its irresistible chorus, sardonically applauds a faithless ex for his signature achievement: "You played the one that loved you the most." "Betcha Gon' Know" foresees karmic revenge for a wayward lover, but, once again, the clever lyrics ("Oprah Winfrey whole segment for real, for real / 20/20 Barbara Walters for real, for real") encourage a smile amid the pain.

The ballad "H.A.T.E.U.," meanwhile, finds the singer seeing life in the wake of a breakup and longing for the moment when loss and regret transform into a cleansing anger. But the title of the song doesn't necessarily stand for what you think it might. "H.A.T.E.U. is the first song I wrote for the album," Carey says, "and it stands for Having A Typical Emotional Upset."

Always a brilliant technical singer with an extraordinary vocal range, Carey rises to new heights on that track. "I sing a recurring melody in the upper register of my voice; it's not an ad-lib, but an integral part of the song's hook," she says. "That's not something I've done before, and when listening back to it, it reminded me of how Minnie Riperton used her upper register on her hit song `Lovin' You.' I thought how ironic that her song was called `Lovin' You' and my song is called, `H.A.T.E.U.' - and both use that upper `whistle register' as a major part of the melody. So it's sort of an homage to Minnie Riperton, a tribute to her since she has been so influential in my singing style."

On a tender note, the wistful "Candy Bling" beautifully evokes the blissful realm of young love ("Anklets, name plates that you gave to me/Sweet tarts, ring pops had that candy bling/And you were my world"), while "Inseparable" aches for a love that went wrong for reasons that seem impossible to comprehend. "More Than Just Friends" floats off into a fantasy of what a casual relationship might become ("Permanently paint me in your picture like Picasso/Love me down till I hit the top of my soprano!"). "Ribbon" and "The Impossible" swoon with happiness and thankfulness over redemptive love that has returned to make life rich again. "You did the impossible," Carey sings. "You rescued my love."

Memoirs of an Imperfect Angel ends with a spectacularly powerful gospel rendition of Foreigner's gorgeous ballad, "I Want to Know What Love Is." Carey's voice soars into the heavens as a soul-stirring choir makes it clear that the search for love is the closest that any human being ever gets to the divine.

Which brings us back to the angel of the album's title. "I had written a song called `Imperfect,'" Carey says, "but it didn't make it onto the album. The lyrics of that song address the fact that the world puts so much pressure on us -- especially on women -- to be perfect and look a certain way, and that is impossible because nobody is perfect. Only God is perfect. I know I've tried to be a good person, but I am definitely no angel!"

"But after I put this album together and decided to name it Memoirs of an Imperfect Angel," she concludes, "I remembered that the Minnie Riperton album that contained `Lovin' You' was called Perfect Angel. So I felt in so many ways that it was meant to be."

tcm:40-524159-64
Fully Operational with Expanded Resources Click for the latest on how KEYENCE is continuing to support our customers with quick delivery, off-site testing, virtual demos and more.

Rewriting the Book on Vision Sensors with Artificial Intelligence